Circle Chart (formerly known as Gaon Chart) has revealed its chart rankings for the week of September 25 to October 1!

CRAVITY topped this week’s physical album chart with their fourth mini album “NEW WAVE,” which debuted at No. 1.

EXO’s Xiumin’s solo debut mini album “Brand New” entered the chart at No. 2, while BLACKPINK’s latest studio album “BORN PINK” held onto its spot at No. 3.

The Nemo version of NCT 127’s latest album “2 Baddies” debuted at No. 4 on this week’s chart, and Red Velvet’s 2019 repackaged album “The ReVe Festival: Finale” rounded out the top five. 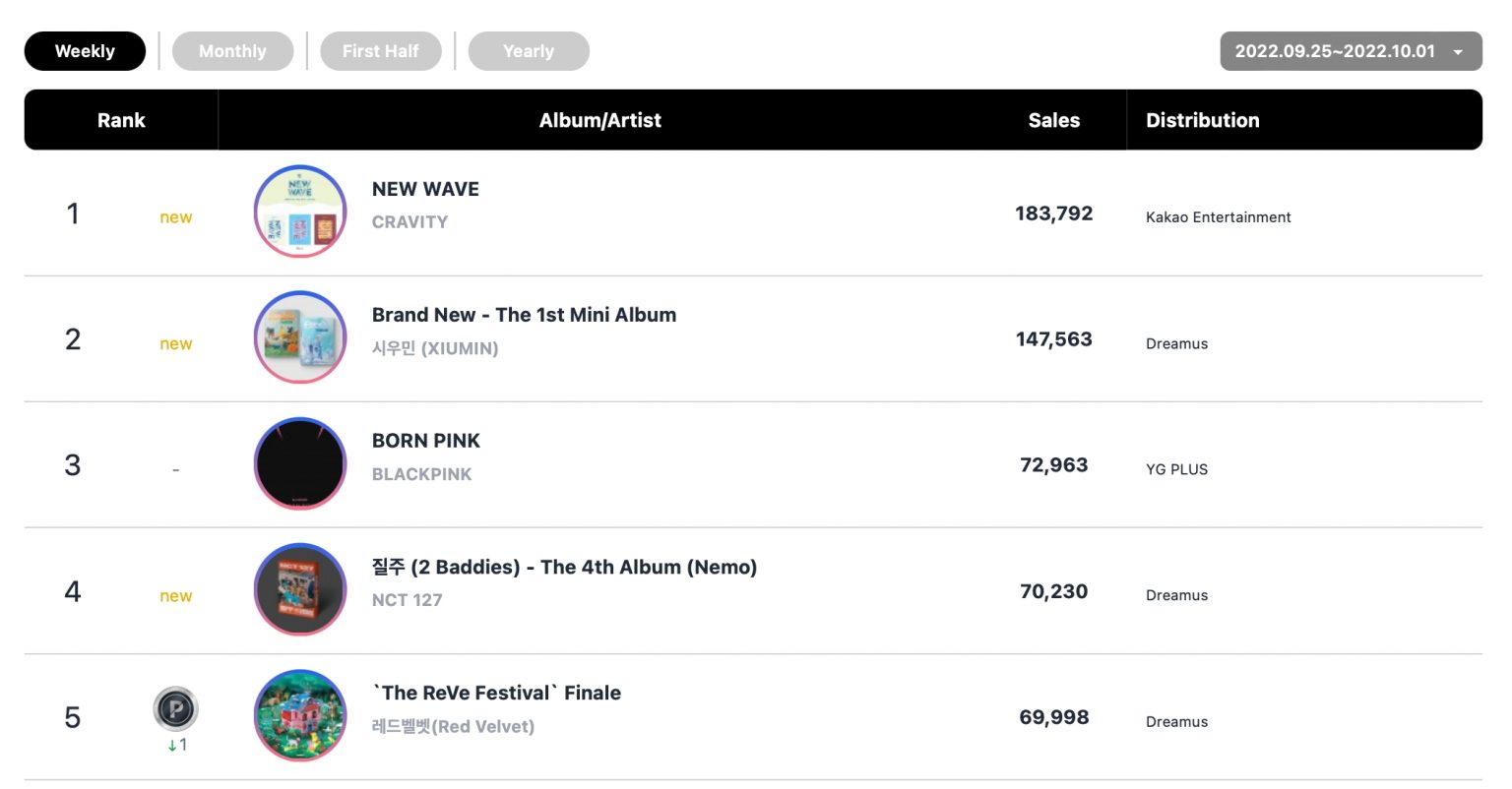 After four consecutive weeks at No. 1, IVE’s smash hit “After LIKE” came in at No. 2 on this week’s overall digital chart, while BLACKPINK’s latest title track “Shut Down” held steady at No. 3.

Finally, NewJeans swept the last two spots in the top five, with “Attention” at No. 4 and “Hype Boy” at No. 5 for the week. 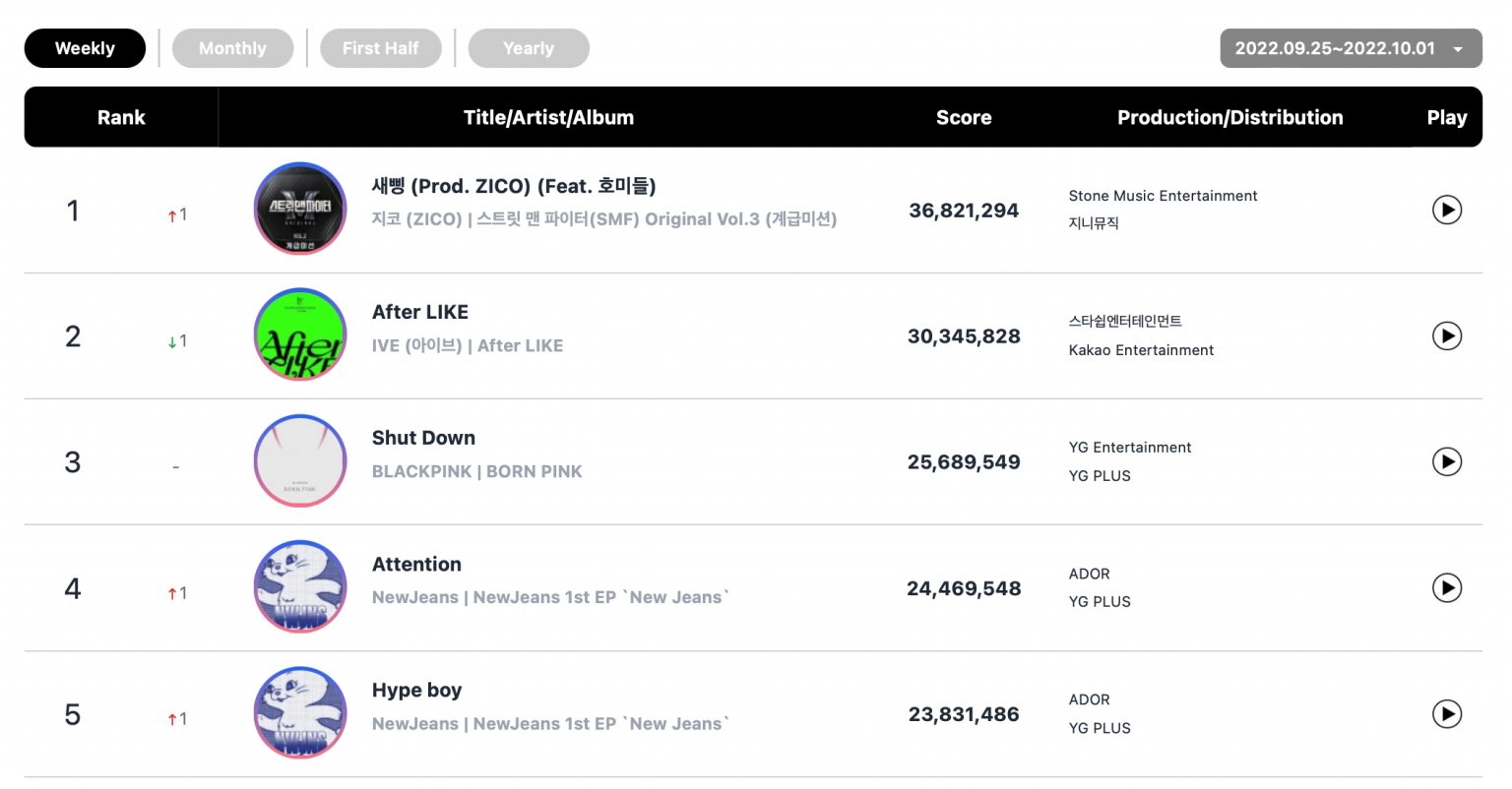 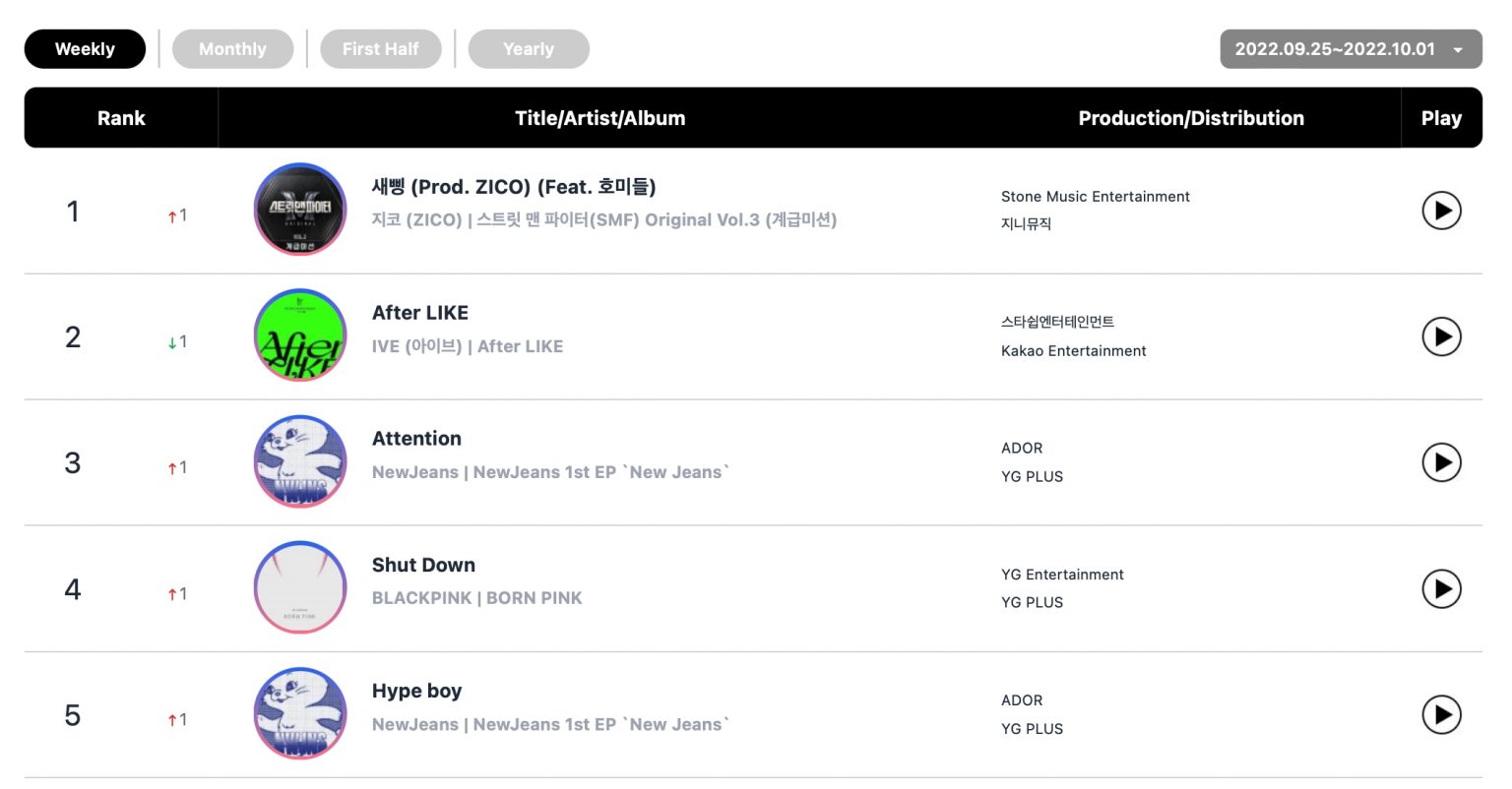 BLACKPINK maintained their double crown on the Circle charts this week, topping both the new Global K-Pop Chart (which is based on global streaming) and the social chart once again.

Just like last week, BLACKPINK swept the top two spots on this week’s Global K-Pop Chart, with “Shut Down” and their pre-release single “Pink Venom” remaining No. 1 and No. 2 respectively. 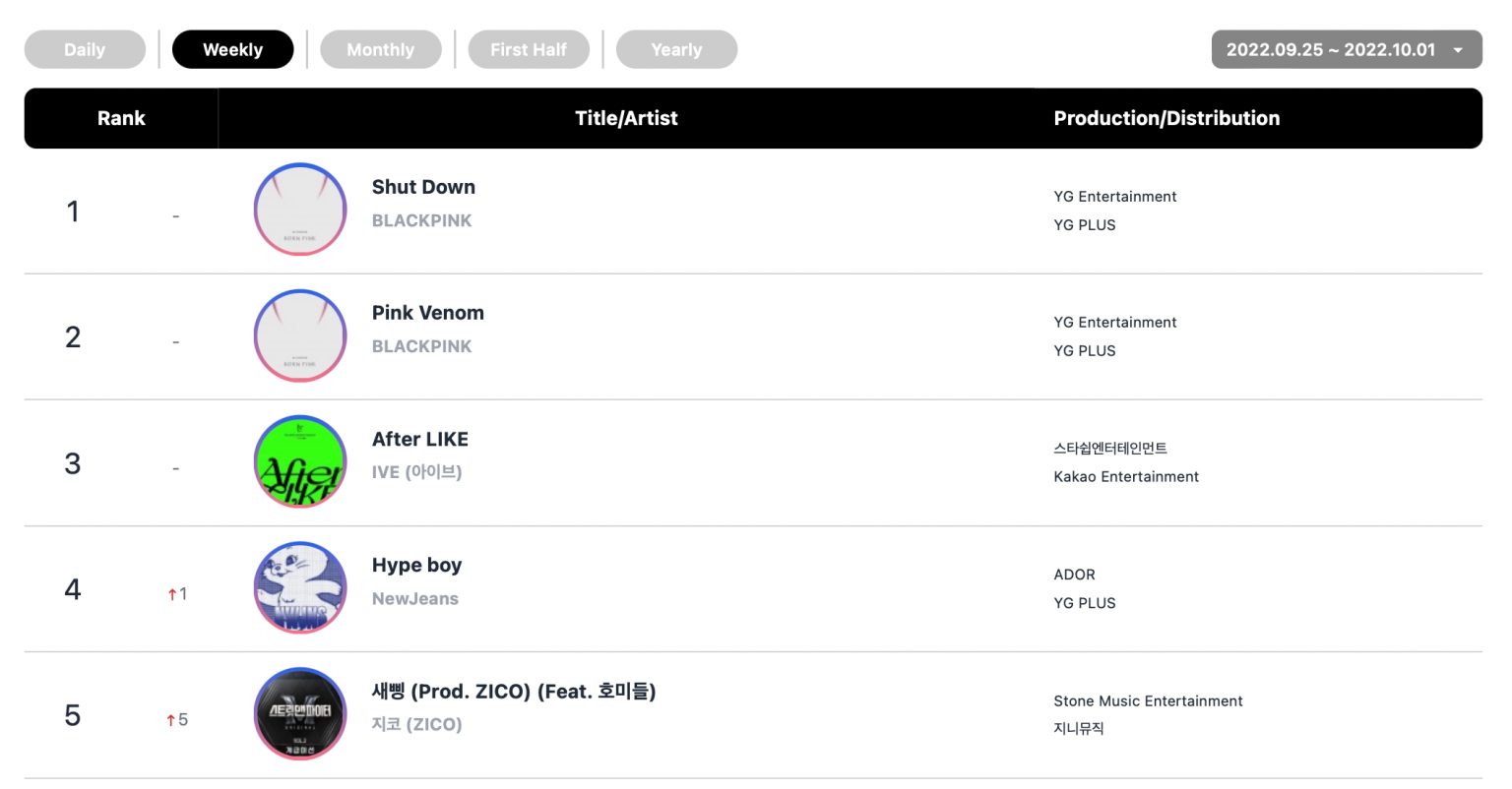 Lim Young Woong swept the top three spots on this week’s digital download chart, where “If We Ever Meet Again” took No. 1, “Our Blues” No. 2, and “Rainbow” No. 3.

Kim Ho Joong claimed the final two spots in the top five, with “meet you among them” (from the OST of KBS 2TV’s “Three Bold Siblings“) rising to No. 4 and “Beautiful life” climbing back up to No. 5. 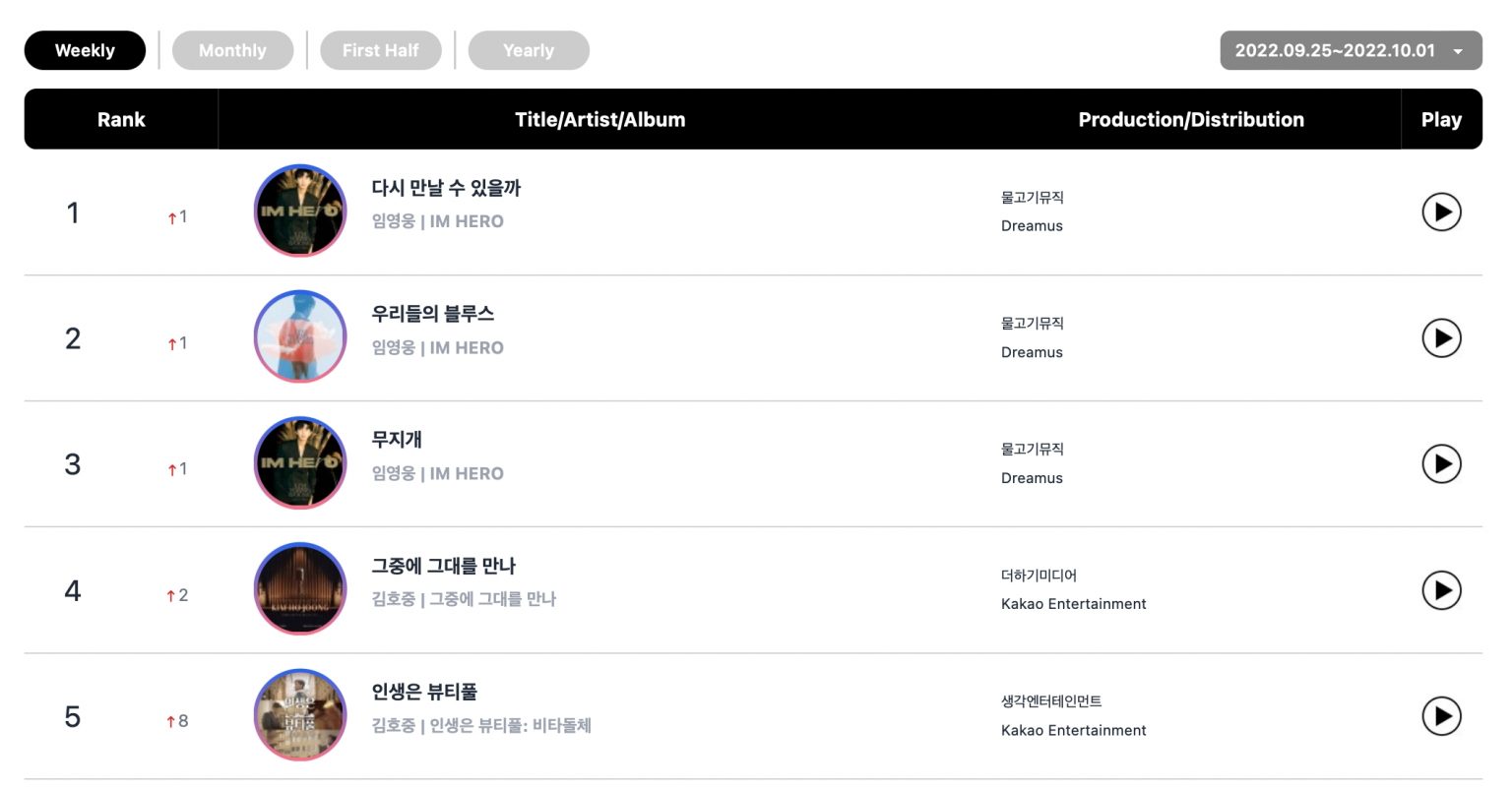 The top three artists on this week’s social chart were exactly the same as last week: BLACKPINK remained No. 1, followed by BTS at No. 2 and Lim Young Woong at No. 3.

Finally, NewJeans and TWICE rounded out the top five for the week at No. 4 and No. 5 respectively. 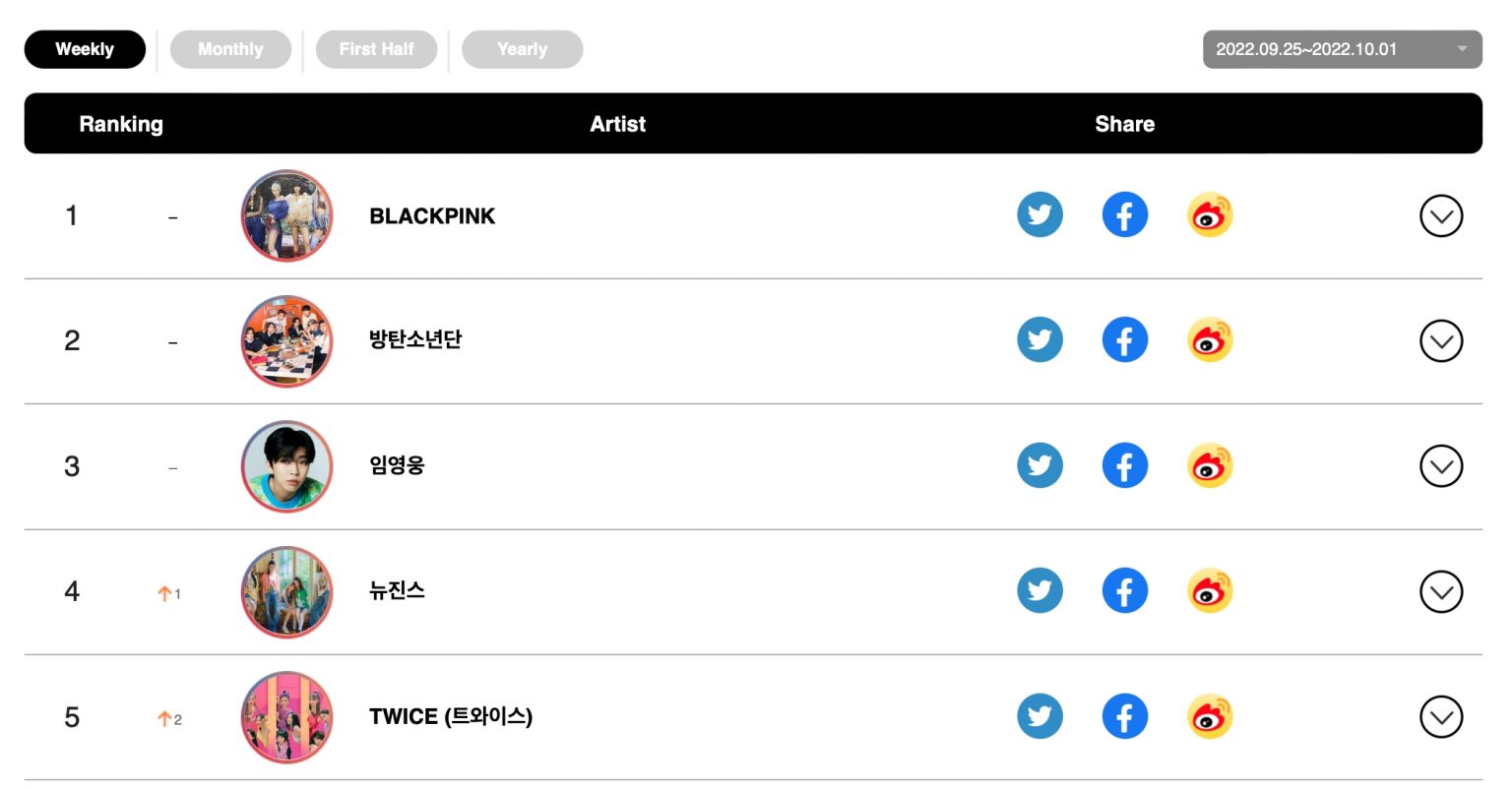