The ONU Human Rights Council once again reaffirms its commitment to combating discrimination and violence based on the SOGI and reminds all States of their obligations to LGBT and gender diverse people.

(Geneva, July 7, 2022) – The United Nations Human Rights Council (CDH) adopted a resolution to renew the mandate of the Independent Expert on protection against violence and discrimination based on sexual orientation and gender identity. gender (OSIG) for three more years. In a critical vote, the resolution was adopted with 23 voting in favour, 17 voting against and 7 abstaining.

1256 non-governmental organizations from 149 states and territories in all regions supported a campaign to renew the mandate. 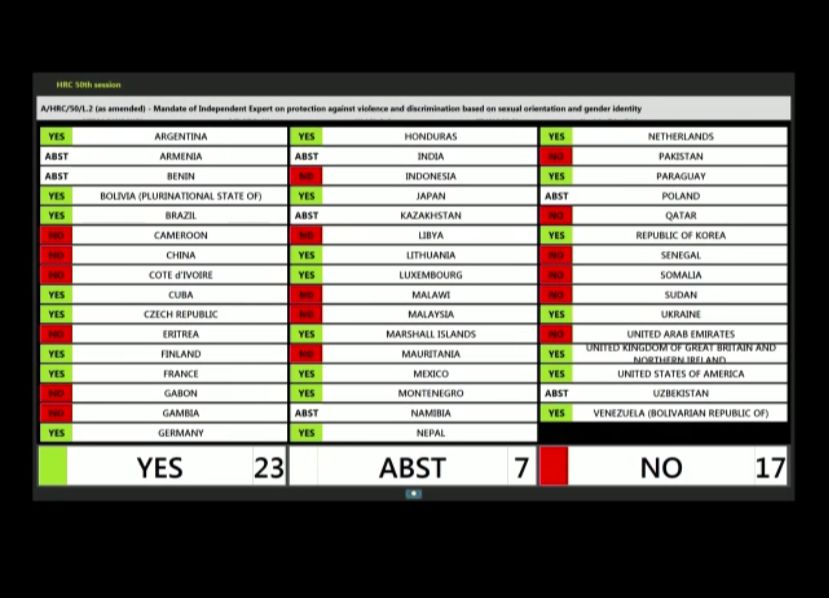 Today’s vote marked the first time that the Human Rights Council adopted a resolution explicitly condemning legislation that criminalizes consensual conduct between people of the same sex and diverse gender identities, and called on states to amend discriminatory legislation and combat OSIG-motivated violence.

“Billions of people continue to live with laws and social attitudes that put them at risk,” said Manisha Dhakal of the Blue Diamond Society in Nepal, speaking on behalf of a global coalition of civil society organizations. “Recognizing that much work remains to be done, the Council once again reaffirmed its commitment to combat OSIG-based discrimination and violence, reminding all States of their obligations towards these communities.”

“The existence of a specific UN human rights mechanism on SOGI-based violence and discrimination is crucial for our communities to be heard globally,” added Carlos Idibouo of Fierté Afrique Francophone (FAF) in Côte d’Ivoire. . “If the world is truly committed to leaving no one behind, it cannot help but address the violence and discrimination we face. Laws that criminalize our identities and actions are unjust and should no longer be tolerated.” Created in 2016 and renewed for the first time in 2019, the Independent Expert mandate has received the support of a growing number of States from all regions. The resolution to create and renew the mandate was introduced by a group of seven Latin American countries (Argentina, Brazil, Chile, Colombia, Costa Rica, Mexico and Uruguay) and was co-sponsored by 60 countries from all regions.

The independent expert evaluates the implementation of the international right of human rights speaking with the States and working in collaboration with other regional and ONU mechanisms to address violence and discrimination. Since 2016, the world has learned more about the impact of the criminalization of consensual relationships between adult persons of the same sex, the need to legally recognize the gender of a person, the barriers to social inclusion, the importance of compiling data related to the life of LGBT people, the damage caused by the calls ‘conversion therapies’, and more. The expert has also shed light on good practices to prevent discrimination and has recently made visits to Argentina, Georgia, Mozambique, Tunisia and Ukraine.

We hope that all governments will fully cooperate with an Independent Expert in this important work to achieve a world free of violence and discrimination for all people, regardless of their sexual orientation and gender identity.

Delighted to know that the @UN_HRC has just renewed the #IESOGI mandate; as humble and honored as the first day to continue serving individuals, communities and peoples affected by discrimination and violence based on sexual orientation and gender identity.