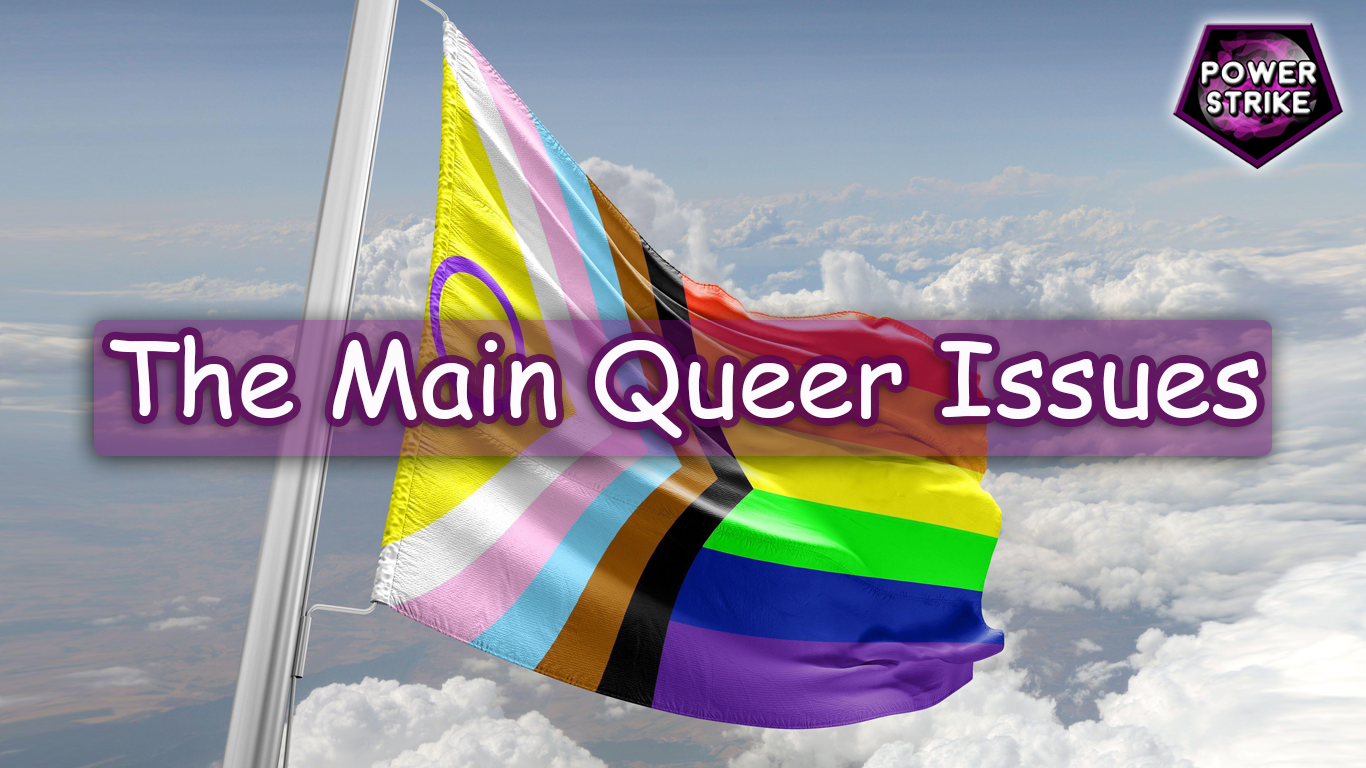 Queer issues related to sexual orientation and gender identity are important to ensure that LGBTQIA+ people have the same opportunities and rights as cisgender and straight people. Some of the main issues include:

Civil Rights: Fight for legal equality for queer people, including the right to marry, parental rights, protection from discrimination and more

The fight for civil rights for queer people is an ongoing effort to secure legal equality in areas such as marriage, parental rights, and protection from discrimination. This includes efforts to legalize same-sex marriage, grant equal adoption and parenting rights to same-sex couples, and pass laws that protect LGBTQIA+ individuals from discrimination in areas such as employment, housing, and public accommodations. It also includes efforts to repeal laws and policies that discriminate against LGBTQIA+ individuals and to challenge discriminatory practices in the criminal justice system. It is important that these efforts are driven by the community, and that they are inclusive of the diverse experiences and identities within the LGBTQIA+ community.

Representation and Visibility: Ensuring that queer people are accurately and positively represented and portrayed in media and culture

There are a number of unique challenges that queer people may face when it comes to their health. One of the most significant is the higher rates of mental health issues, such as depression and anxiety, that are often seen in queer individuals. This may be due in part to the discrimination and stigmatization that many queer people experience.

In addition to these issues, queer people may also face unique challenges related to physical health and gender treatment. For example, transgender individuals may experience barriers to accessing appropriate healthcare, and may also face discrimination or lack of understanding from healthcare providers. This can make it difficult for them to receive the care they need.

Discrimination: Fighting discrimination and violence based on sexual orientation and gender identity, including bullying, domestic violence and hate violence

Discrimination against individuals based on their sexual orientation and gender identity can take many forms, including bullying, domestic violence, and hate violence. These forms of discrimination and violence can have severe and long-lasting impacts on the physical and mental health of those who experience them.

To fight discrimination and violence based on sexual orientation and gender identity, a number of different strategies can be employed. One important approach is to increase awareness and understanding of these issues among the general public, as well as among policy makers, law enforcement, and other key groups. This can be done through education and awareness campaigns, as well as through the inclusion of LGBTQIA+ perspectives and issues in media and pop culture.

Additionally, creating safe spaces for LGBTQIA+ individuals, such as support groups, can provide a sense of community and belonging, which can be important in fighting discrimination and violence.

Equal Opportunity: Ensuring that queer people have the same opportunities for employment, education and housing

Another important strategy is to provide education and training for employers, landlords, and other key individuals and organizations to increase awareness and understanding of LGBTQIA+ issues and to promote inclusivity and diversity.

Additionally, organizations such as LGBTQIA+ centers and advocacy groups, can provide resources and support for LGBTQIA+ people to help them navigate systems and advocate for themselves.

Intersectionality: Recognizing how queer people are affected by discrimination based on race, gender, class, ability, and other identities

Intersectionality refers to the ways in which different aspects of a person’s identity, such as race, gender, class, ability, and sexual orientation, interact and combine to create unique experiences of discrimination and privilege.

Recognizing the intersectionality of queer people’s experiences is important in order to fully understand and address the discrimination they face. This can include recognizing the specific challenges and barriers that queer people of color, queer people with disabilities, and other marginalized groups within the LGBTQIA+ community may face, and tailoring interventions and support accordingly.

Additionally, acknowledging the intersectionality of queer people’s identities in policy and legislation is crucial to ensure that all aspects of their experiences are taken into account.

Overall, to address discrimination based on sexual orientation and gender identity, it is important to recognize the intersectionality of queer people’s identities and experiences and to take a holistic approach that addresses the unique challenges faced by different marginalized groups within the LGBTQIA+ community.

Trans Rights: Ensure legal and health rights for trans people, including access to gender reassignment therapy, name change, and ensuring there is no discrimination based on gender identity

Ensuring legal and health rights for trans people is an important aspect of promoting equality and social justice.

In terms of legal rights, this can include ensuring that trans individuals have the right to change their legal name and gender marker on identification documents, and that laws and policies are in place that prohibit discrimination based on gender identity.

In terms of health rights, it is important to ensure that trans individuals have access to gender reassignment therapy, including hormone therapy and surgery, if they so choose. This also includes providing education and training for healthcare providers to increase awareness and understanding of trans issues and to promote inclusivity and diversity in healthcare settings.

It is also important to recognize that access to these therapies and rights may vary depending on the country or region, and that some trans people may face barriers to accessing these services due to lack of resources or lack of legal protections.

Overall, ensuring legal and health rights for trans people requires a multifaceted approach that includes implementing laws and policies that protect the rights of trans individuals, providing education and training, and promoting inclusivity and diversity. It is also important to understand that trans rights are a human rights issue, and it is essential to work on changing societal attitudes and beliefs, as well as implementing policies and regulations to ensure the rights and equality of trans people.

Non-binary rights: Ensuring that people who do not fit within the two traditional genders have health and legal rights

Non-binary rights refer to the legal recognition and protection of individuals who do not identify as exclusively male or female. This can include the right to have their gender identity recognized on legal documents, access to healthcare that respects their gender identity, and protection from discrimination in the workplace and other areas of life. It is important for societies to recognize and respect the diversity of gender identities and to ensure that non-binary individuals have the same rights and opportunities as those who identify as male or female.

The fight for equality and justice for Queer people is far from over and requires the continued support and action of society.

The support and action of individuals, organizations, and governments are crucial in continuing to make progress towards achieving full equality and justice where everyone can live with dignity and respect.