Here was a blend of post-streetwear clothing, with sharp tailoring and a capsule collection with the Godzilla franchise. 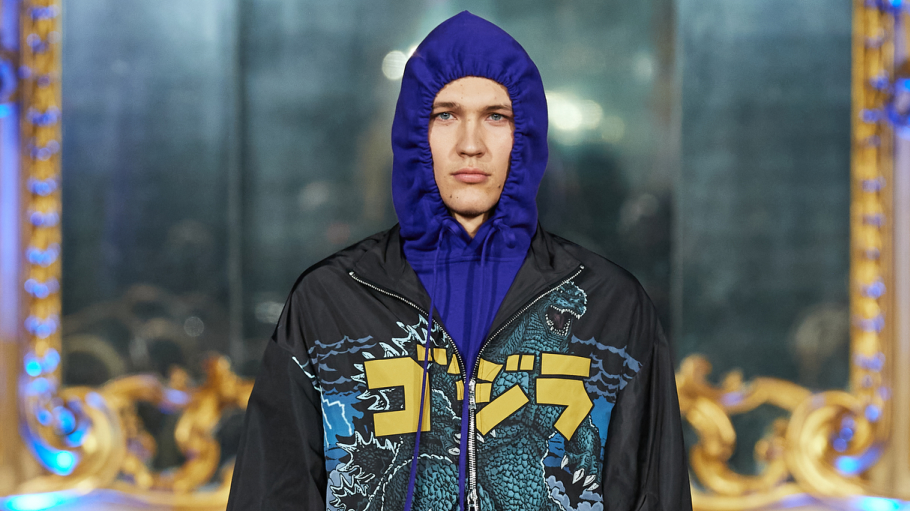 The frescoed 18th-century Tiepolo Room at Palazzo Clerici was an unlikely choice for Indian designer Dhruv Kapoor to unveil his post-streetwear garb — his toying with tailoring, workwear and pop references turning out as an offbeat blend. Backstage he described the fall coed collection (after some tests and tries he has settled on the combined format in January and September) as a play on softness and ruggedness, much to the detriment of the latter, likening the contrasts in the lineup to the different traits in one’s personality. Roomy sartorial pants were layered under pleated overskirts for men and women alike, hitting a trend that was seen elsewhere this Milan season. A violet version was matched with a skin-tight lacy underpinning and a printed shirt.

A closer look at it would reveal it’s part of a see-now-buy-now capsule collection developed with the Godzilla franchise — quite appealing for fans of Kapoor’s pop-tinged garb in Japan or the U.S, his strongest markets.

“Godzilla has a very negative, monstrous thing attached to it, it was about spinning that [side] around and accepting that version, as well,” the designer said backstage.